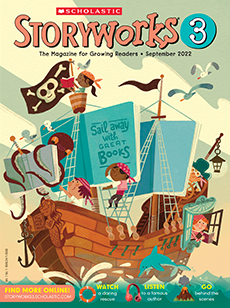 In this relatable story about a clever boy who creates a robot to secretly do his chores around the house—and the problems this causes— students will understand how the main character changes from the beginning of a story to the end.

Think and Read: How a Character Changes

As you read, think about how Max’s plans—and attitude— change in this story.

Max Welling had been building his robot, Walter, in secret for months.

Max was able to build Walter because his father ran a repair shop. His dad worked on old computers, TVs, toasters, and clocks. The family’s basement at home was full of extra odds and ends. Max would rummage through them and sneak things into his room. A piece here. A part there. Finally, Walter the robot was ready for action!

Max had finished Walter just in time. His father needed to sell the repair shop soon. It was struggling. People were buying new things, not fixing broken ones. His father was taking college classes at night so that he’d be able to find new work. Meanwhile, his mom had started a full-time job. With both of his parents so busy, Max had to help out more at home. He didn’t like that idea, but he had a plan. Walter could help.

PAUSE AND THINK: How did Max get the parts to build Walter?

In Max’s new routine, he had to do chores after school. Then he’d walk two blocks to visit his great-grandmother, Matilda. She was 92 and lived in a home with other older people. They were well cared for there. One of his parents would pick him up around dinnertime.

On that first day, Max took the bus home from school. He had to put dirty dishes into the dishwasher, wipe countertops, and sweep the floor. This was exactly what Walter was built for! Max got Walter out of his bedroom closet, where the robot was hidden.

He turned him on. Walter’s eyes blinked on, glowing blue. “How may I help you?” Walter asked.

Max told him to do the chores. “Get back in the closet by five o’clock,” he said.

PAUSE AND THINK: What did Max want Walter to do for him?

A Puzzle to Solve

Max left Walter hard at work. Then he went to Grandma Matilda’s. She introduced him to a man who had just moved into the home.

Mr. Gravis sat in a chair, staring ahead with a mad face. He wouldn’t even look at Max.

“Poor Mr. Gravis has come out of his room only once,” Grandma Matilda told Max as they walked away. “He asked me to play chess and won in five minutes! Then he said, ‘What’s the use?’ and went back to his room. Guess I’m not challenging enough. He has no family. His friends have died. I wish I knew how to make him feel better!”

Max and Grandma Matilda stopped by the parakeet cage. They got ice- cream sandwiches. Then they worked on a crossword puzzle. As Max filled in the little squares, he thought about Mr. Gravis. In a way, Mr. Gravis was also like a puzzle that needed to be solved.

When Max and his parents got home, his mother was shocked. “Wow! The kitchen is sparkling!” she said.

“Proud of you, son,” his father said.

“It was nothing,” Max said. Which was true. Walter had done all the work.

Max felt a little guilty. His parents were pleased. Things were going as planned. But why didn’t he feel happier?

PAUSE AND THINK: What are two reasons Mr. Gravis might not be happy?

The next day, when Max got home from school, his parents had a new list of chores waiting for him. Max felt bad when he got Walter out of the closet. He felt like he was lying to his parents. But he had spent months building Walter. He didn’t want to let him go to waste! He told Walter what his chores were and told him to get back in the closet by five.

Max went to visit Grandma Matilda. As usual, she beat Max at chess. She was the best player Max knew. Mr. Gravis would really have to be an expert at chess to have beaten Grandma Matilda in just minutes!

“Is Mr. Gravis doing any better?” Max asked as they put the chess game away.

PAUSE AND THINK: Why did Max want to keep using Walter?

When Max and his parents got home that night, they were in for a surprise. The shelves had been dusted, but the board games were all over the floor. A plant had been knocked over too.

“What happened, Max?” his father asked.

Max had to think fast. “I was organizing the games, and then I knocked over the plant. But I didn’t want to be late to go see Grandma Matilda. I’m so sorry! Really I am! I will pick everything up here in a minute! I promise!”

Max ran into his room before his parents could say anything. He threw open his closet door. Walter’s wires were showing. His eyes blinked on and off.

“How help you I may?” Walter said loudly. He must have gotten an electric shock that made him all mixed up.

Max turned Walter off. The robot’s eyes dimmed and didn’t come back on.

Max spent the rest of the night cleaning up the mess. Then he opened his closet door and stared at Walter.

He knew he should probably take Walter apart. He should sneak the parts back into the basement. It wasn’t right to lie to his parents. Max shouldn’t have forced Walter to do things Max should have been doing himself. Still, the thought of taking him apart made Max sad. He felt close to Walter. That’s when he noticed Walter was holding something in his hand.

Walter must have picked it up earlier when he was trying to organize the games, before he went crazy.

Max took the piece from Walter.

Then Max had an idea. He took Walter out and began to work on him.

PAUSE AND THINK: What was wrong with Walter?

A month later, Max was done keeping secrets. He showed Walter to his parents. He told them he’d used Walter to do his chores. But he had a new plan for his robot. He’d been working on him nonstop. Today, Walter was ready for his new job.

After finishing his chores, Max carried Walter to Grandma Matilda’s. She asked Mr. Gravis to come out of his room. “My grandson has the perfect chess partner for you,” she told him.

In the game room, Walter sat waiting at a table. His blue eyes were lit up. He had a chessboard set up in front of him.

“I’ll give it a try,” Mr. Gravis grumbled. He sat down across from Walter.

They were still playing another game when Max’s parents came to get him. “Good job, Walter!” Max said. He left Walter with his new friend, Mr. Gravis.

Max turned around to look at Walter one more time. He wasn’t sure, but he could have sworn Walter winked one eye at him.

PAUSE AND THINK: What was Walter’s new job?

Dave Wheeler was the illustrator for this story. Have students take a closer look at the opening illustration on page 14. Dave actually built that robot out of stuff he had at his house and photographed it as part of his unique collage style! Dave says: “I was happy with the result but, unlike the robot in the story, it doesn’t clean my studio.”

Check out this video from our friends at Scholastic News—you’ll see all kinds of robots in action!

Watch this cool video of meerkats examining and accepting a robot meerkat into their gang.

Your students will love this video of a speedy chess match ending in under two minutes between two humans. Yes, technology is great, but it's no match for the human brain!

Direct students to the illustration on page 14. Ask: What tasks do you think this robot can perform? Use details to support your ideas.

Set a Purpose for Reading (10 minutes)

We have created a fiction package that helps students focus on one important aspect of the story—in this case, how the main character changes. The tasks in the Think and Read and Think and Write boxes work together to support this skill focus. Have one student read the task in each box.

Read aloud the first Pause and Think box on page 15. Tell students that these questions will help them check whether they’ve understood what they’ve read.

The words are defined at the bottom of the column in which they appear. Discuss the meanings of the words, looking at how they are used in the story to help students further understand them.

Distribute our vocabulary activity for more practice with these words. You can also play our Vocabulary Slideshow.

First read:  Students should read the story through one time for general comprehension.

Second read:  Distribute the close-reading and critical-thinking questions. (For struggling readers, you can distribute the sheet of Pause and Think questions.) Preview them as a class.

How a Character Changes

Call on a volunteer to read aloud the Think and Write box at the bottom of page 19.

Distribute our Fiction Reading Kit, which focuses on key reading skills, including our featured skill, character. Have students work in small groups to complete it.

Pretend this story is the first chapter in a book. Predict what happens in the next chapter. Write a three- to five-sentence summary of this second chapter.

Have students write three questions they’d like to ask the author. Is there a character they want to know more about? What are they still wondering about?

With students, re-examine the illustrations in the story. Ask them to discuss their favorite scene. Invite them to choose a scene that hasn’t been illustrated and draw it.

Have students write a one-page story from Walter’s point of view. Encourage them to think about the scenes in “Clean Start” involving Walter and how he might have felt in those scenes.

For On Level Readers

How do Max's plans for Walter change from the beginning of the story to the end? Why does he change his plans? Answer in a well-organized paragraph, using details from the story to support your answer.